Dark Noise has been in the App Store for over a year, yet I’ve never actually run a sale before. In fact, the only price change I’ve made at all is increasing the price by a few dollars when I shipped my 2.0 update.

This was due partially to laziness, but also a slight sense of feeling gross about sales for some reason? Truth be told I don’t have a good reason for this, but I had this generic (and quite frankly silly) notion in the back of my mind that it feels slightly desperate and devalues the product somehow.

So when François reached out about joining his Indie App Santa project and putting Dark Noise on sale for 50% for 1 day I was weirdly hesitant. But I figured “what’s the worst that could happen?” and agreed.

Based on literally no data I kinda figured that I’d probably get around double the sales from the Indie App Santa Twitter account promotion and me tweeting about it from my account. At 50% off this would mean I’d pretty much be breaking even on revenue. Since Dark Noise is paid up front with no subscription or in app purchases, this would basically be a wash with a slight bump in users.

Here’s my sales for the month of december. See if you can spot what day the sale took place! 😅

Note: This is sales, not units so the 50% off is already taken into account.

This was a way bigger bump than I was expecting, easily making up for the price difference. It’s worth noting it did trail off pretty quickly after the sale ended. It’s a bit hard to tell exactly how quickly because sales bumped again a few days later on Christmas when the app was mentioned in a few “Best apps for your new phone” articles.

One thing I’m curious about is what’s driving the sales spike. Indie App Santa has almost 5,000 followers on Twitter who are actively looking for app deals, so I’m curious how much is driven by them and how much is the sale itself.

As expected Web Referrers and App Store Search have big spikes, but curiously so is App Store Browse (customers who found the app through general App Store browsing vs direct link or specifically searching my app). Possibly this is because the price is lower so more people who saw the app converted to sales? My conversion rate for the day was up 59.3% (though still very low) but there’s so much noise from all the direct sales that this is hard to really tease out what’s really going on here.

Let’s dig into where the web referrers are coming from. 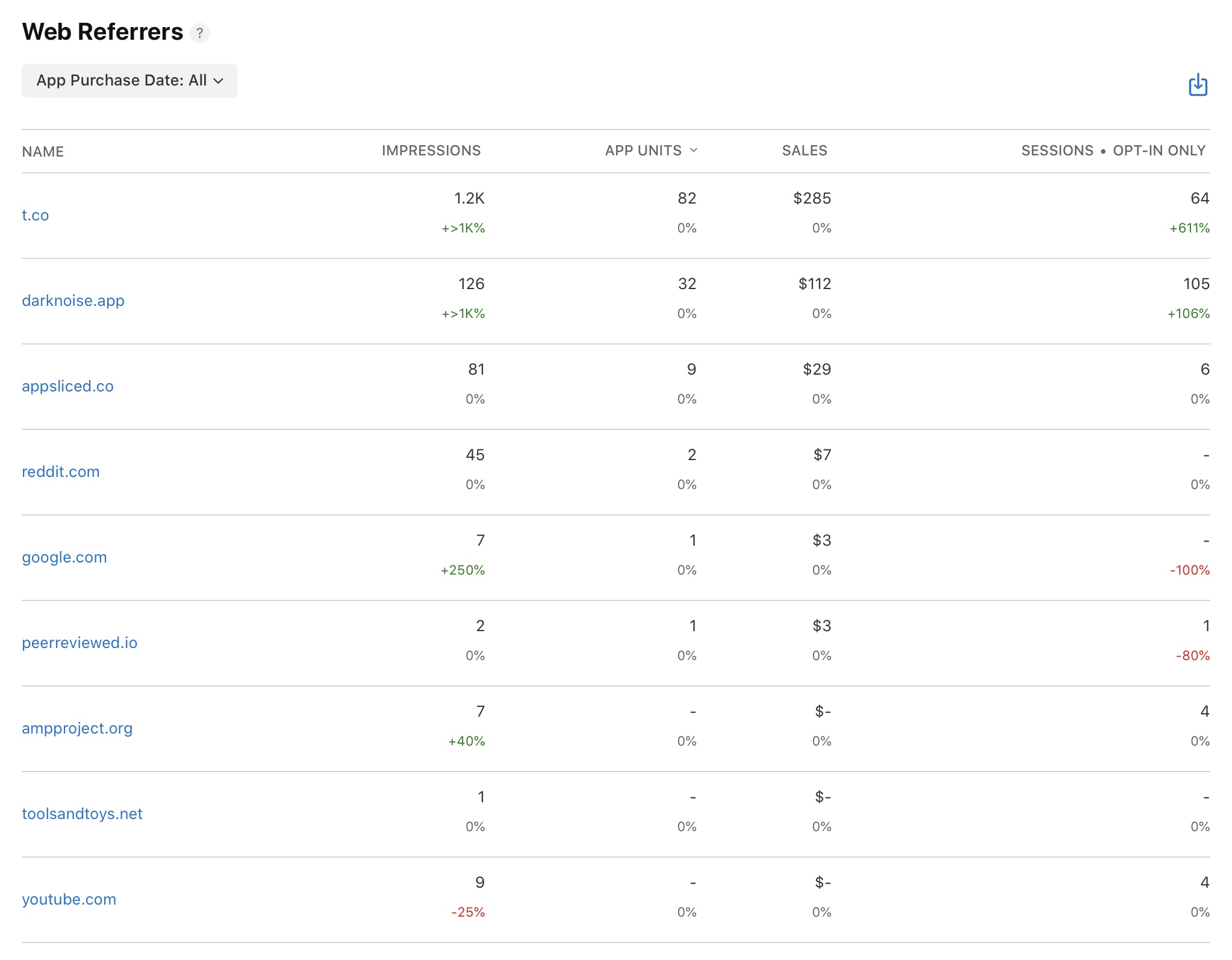 The actual numbers here are much lower than the numbers on the aggregated "Sources" page in App Store Connect. Not sure what to make of that?

“t.co” is traffic coming from Twitter (I think that’s something to do with their url shortener or analytics or something?) so that definitely lines up with what I was expecting. And most other referrers are probably from people doing some research on the app through my website or reviews written about it after they saw the app on sale on Twitter. Somebody also made a Reddit post on a subreddit that promotes app sales that drove some sales as well. 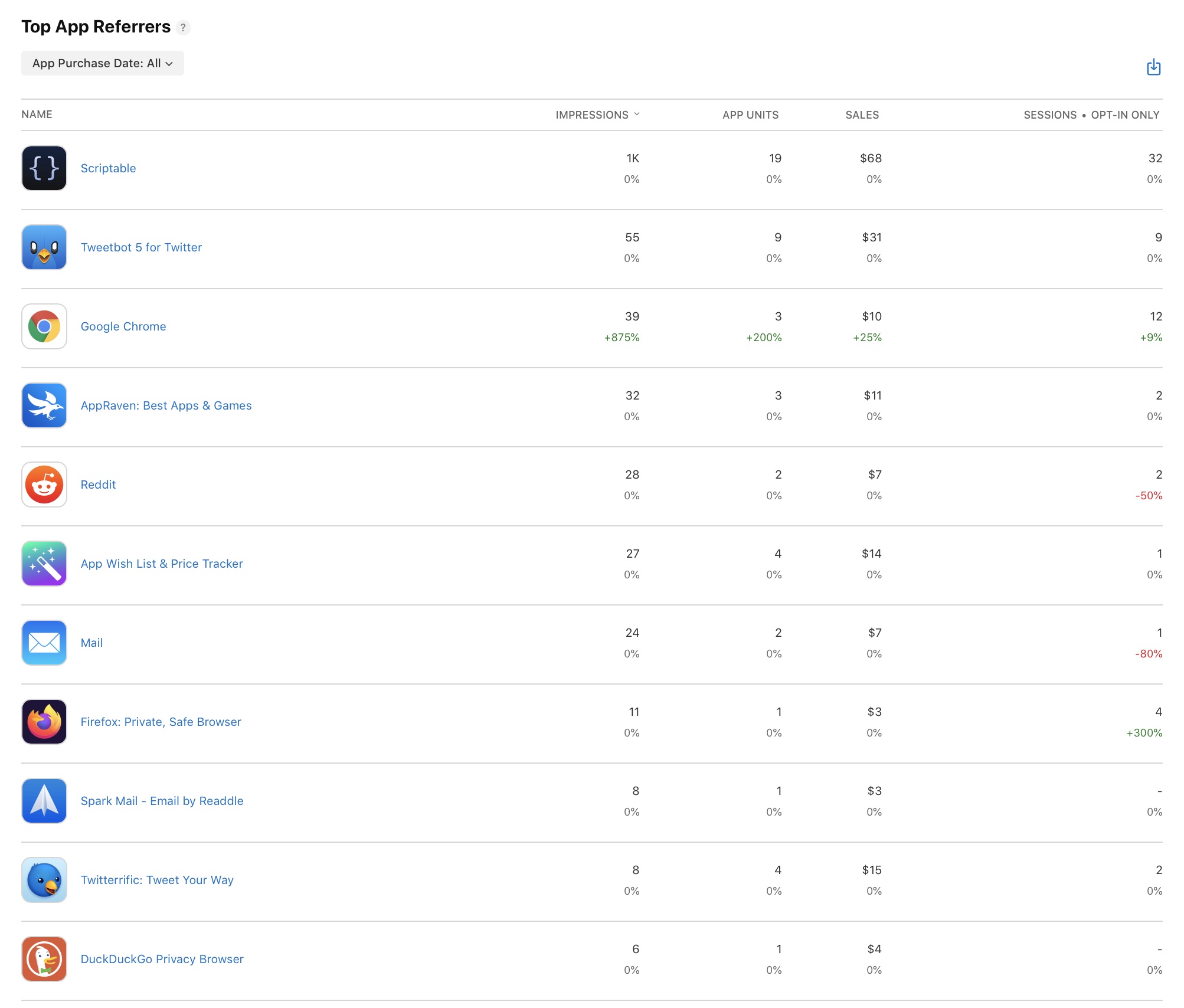 The excellent app Scriptable at the top is, I believe, a result of their partnership with Indie App Santa where you could make a widget for what app is on sale each day using Scriptable. Tweetbot and Reddit apps make sense for the same reasons as the web traffic (I believe the official Twitter app will always show through Web Referrers because it routes you through Safari when you click links?).

The interesting bit here is that there appears to be some apps out there still that track apps with price drops that can drive at least a some sales. I’ll have to experiment at some point by lowering the price with zero promotion and see how that impacts sales for the day.

Overall I think this experience shows me I should definitely be experimenting with pricing and sales more (duh!). I think I still want to keep them relatively infrequent for now, but in 2021 I think I’ll probably do some more experiments to see what I can do when promoting them on my own.

With Apple’s release of iOS 14 I’m releasing Dark Noise 2.1 with support for many of the new iOS 14 features. And it’s available in the App Store today!

The biggest new feature of Dark Noise 2.1 is multiple new widgets that act as a shortcut to quickly start playing your favorite sounds. There are 3 new widget types to choose from and you can create as many as you want and place them anywhere on your iPhone home screen1. Each of the new widgets allow you to customize the theme and select a noise for each button.

The “Single Sound” widget has a few more features. You can configure each one to start your sound with a different timer and even automatically set the volume to your prefered level, perfect for a nighttime routine.

Along with the new widgets there are numerous enhancements included in Dark Noise 2.1 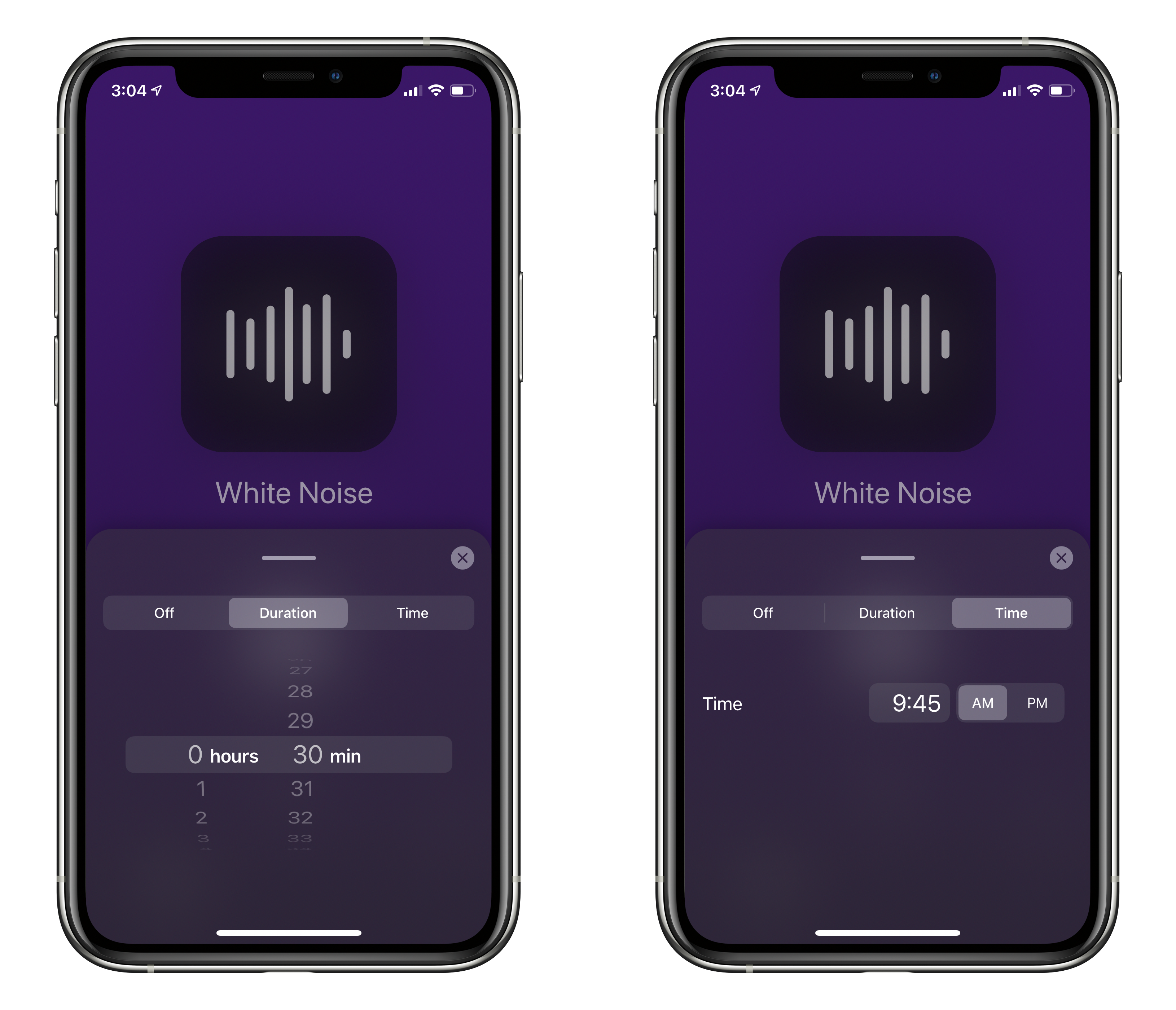 New Timer View • The timer view has been rewritten to make setting a timer more streamlined. 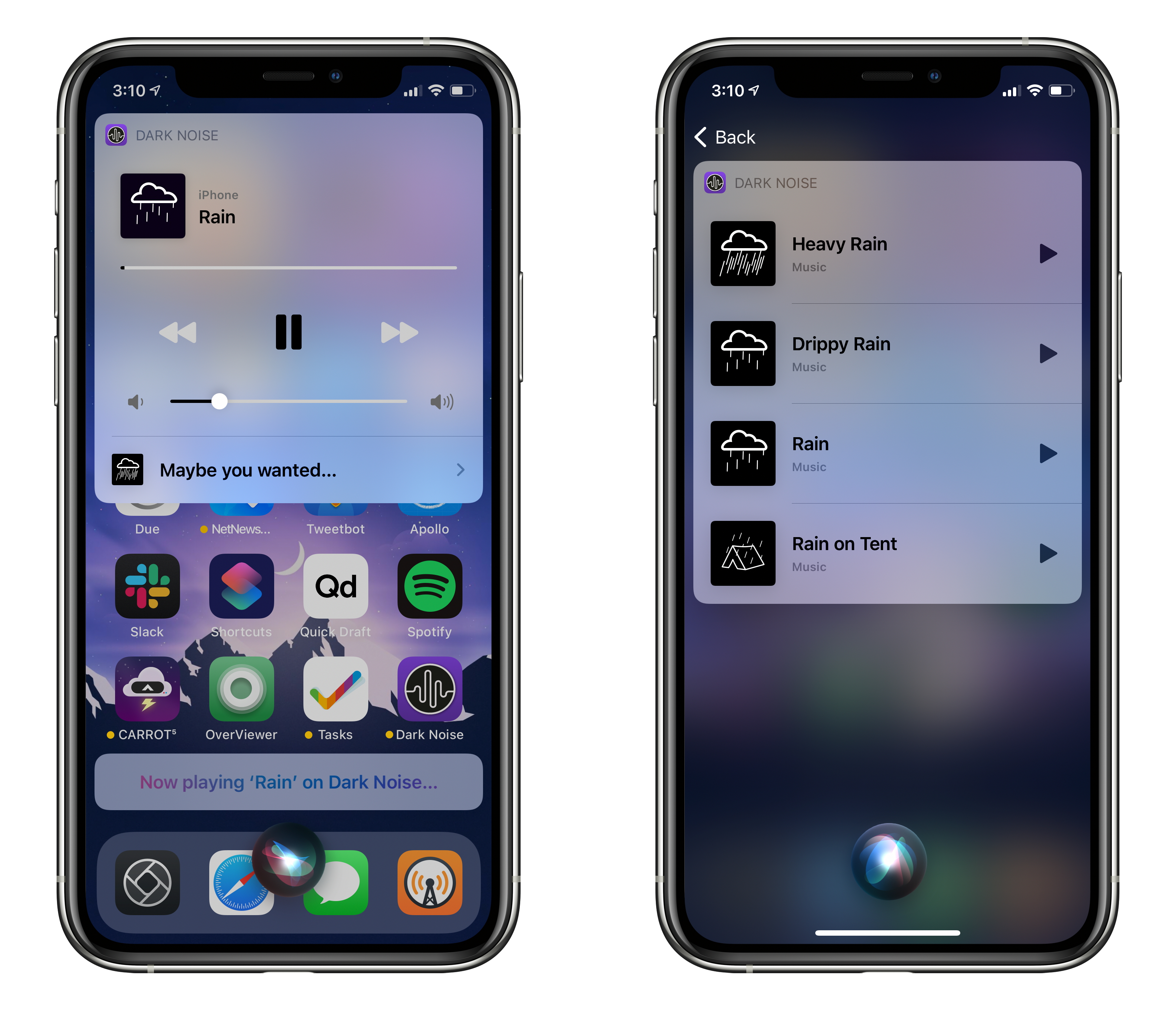 Improved Siri Support • When asking Siri to play a sound on Dark Noise that has multiple options, Siri will show you the alternatives and you can select a different sound to play.

Wind Down • Dark Noise will now show up in the new iOS Wind Down feature.

Dark Noise 2.1 is available on for iPhone and iPad on the App Store here.

Today I’m finally releasing the biggest update of Dark Noise to date to the App Store! Dark Noise 2 is the next major evolution of the best ambient noise app on iOS. Mixing sounds has been the most requested feature since launch and I’m excited to announce it’s finally here! A lot of work went in to maintaining the simplicity and tight iOS integration Dark Noise is known for and I’m very proud of the results. Along with iCloud syncing, new sounds, new icons, and loads of bug fixes this is the biggest update to date.

There’s still so much more I have planned for the future of Dark Noise. First is getting ready for iOS 14. Some early tests with the new Widgets look really promising, and improvements to Siri and Shortcuts look to unlock even more automation possibilities. After that I want to expand on the customization abilities I’ve added with the create mix feature.

Thank you so much for all of your support and kind words over the last year. I’m so excited to see where Dark Noise can go in the future!

This year one of my goals was to try to get into confrence speaking. That… uh… isn’t exactly working out thanks to our good friend COVID-19. But I was given the opportunity to do a quick talk for a remote NSCoder Chicago meetup and I talked about an experiment I’ve been doing using UIInterpolatingMotionEffect to create some parallax effects in UIKit. This is a raw screen recording with only my audio.

For each episode of Launched I create a custom version of the podcast artwork where I replace the paper airplane with a “sketchified” version of the guests app icon (or something else representing the guest if they aren’t an app dev or can’t give me permission to use their icon).

This has eventually led to a few developers adding that icon into their app as an optional custom app icon, which delights me to no end ☺️. I tweeted as much and there was a lot of questions asking how I make them. It’s pretty straight forward so I made a little tutorial showing how I make these sketch style app icons using Procreate on my iPad Pro.

I’ve also created 2 files that I use when creating these icons that you can download here:

As always, feedback is appreciated. If I said anything dumb (likely) or if you end up using this technique for a project yourself I’d love to hear about it on Twitter!